Welcome to the latest version of The Joke Archives! You can follow this site on Facebook as well as on Twitter. As always, if a joke is missing it’s copyright or proper credit, please do let me know so I can update it. Many of the jokes I have received do not have the credits attached!

There is never an intent to offend, but jokes by their nature will do just that. Please keep your sense of humor intact as you go through the following posts! You can now easily share the jokes via email, Facebook, Twitter or others, but you can’t copy my code!

And just as with the original site, there are no tricks, traps, or other evil things to get in the way of your enjoyment. There are very very few ads, and those are confined to the sidebar or to relevant category pages. The old site has now been removed and you may need to update your bookmarks.

There once was a lady who was very concerned about her missing parrot.

Not knowing what to do, she called 911. “You gotta help me find my parrot!”

The operator patiently replied, “We can’t help you with that, ma’am. This number only deals with emergencies.”

But the lady persisted, and then the operator told her not to be concerned, that the parrot should fly back in a few days.

Then, out of desperation, the lady begged, “But you don’t understand! The only thing he says is, “Here, kitty, kitty!!!”

QUESTION: You’re on duty by yourself (don’t ask why, you just are, and your Sergeant hates you) walking on a deserted street late at night. Suddenly, an armed man with a huge knife comes around the corner, locks eyes with you, screams obscenities, raises the knife and lunges at you. You are carrying your truncheon and are an expert in using it. However, you have only a split second to react before he reaches you. What do you do ?

Firstly, the Officer must consider the man’s human rights.

“Haw, Jimmie.. Drop the knife, noo, unless you want it stuck up yer arse!” 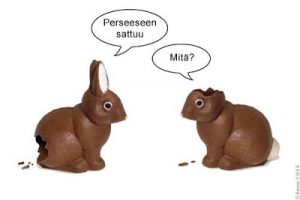 A small boy named Hameed lived in a village in Morocco. None of his classmates liked him because of his stupidity, especially his teacher, who was always yelling at him, “You are driving me crazy Hameed!”

One day Hameed’s mother came into school to check on how he was doing. The teacher told his mother honestly that her son is simply a disaster, always getting very low marks and that even she had never seen such a dumb boy in her entire teaching career! The mother was shocked at the feedback and immediately withdrew her son from the school and moved to another town.

When she opened her eyes after the surgery she saw a handsome doctor smiling down at her. She wanted to thank him, but could not talk. Her face started to turn blue, she raised her hand, trying to tell him something but eventually died.

The doctor was shocked and was trying to work out what went wrong, when he turned around he saw our friend Hameed, working as a cleaner in the clinic, who had unplugged the oxygen equipment to connect his Hoover.

…don’t tell me you thought that Hameed became a doctor !?!

Most people got married in June because they took their yearly bath in May and were still smelling pretty good by June. However, they were starting to smell, so brides carried a bouquet of flowers to hide the B.O.

Baths equaled a big tub filled with hot water. The man of the house had the privilege of the nice clean water, then all the other sons and men, then the women and finally the children. Last of all the babies. By then the water was so dirty you could actually lose someone in it. Hence the saying, “Don’t throw the baby out with the bath water”.

Houses had thatched roofs. Thick straw, piled high, with no wood underneath. It was the only place for animals to get warm, so all the pets… dogs, cats and other small animals, mice, rats, bugs lived in the roof. When it rained it became slippery and sometimes the animals would slip and fall off the roof. Hence the saying, “It’s raining cats and dogs.”

There was nothing to stop things from falling into the house. This posed a real problem in the bedroom where bugs and other droppings could really mess up your nice clean bed. So, they found if they made beds with big posts and hung a sheet over the top, it addressed that problem. Hence those beautiful big four-poster beds with canopies.

The floor was dirt. Only the wealthy had something other than dirt, hence the saying “dirt poor.” The wealthy had slate floors which would get slippery in the winter when wet. So they spread thresh on the floor to help keep their footing. As the winter wore on they kept adding more thresh until when you opened the door it would all start slipping outside. A piece of wood was placed at the entry way, hence a “thresh hold”.

They cooked in the kitchen in a big kettle that always hung over the fire. Every day they lit the fire and added things to the pot. They mostly ate vegetables and didn’t get much meat. They would eat the stew for dinner leaving leftovers in the pot to get cold overnight and then start over the next day. Sometimes the stew had food in it that had been in there for a month. Hence the rhyme: peas porridge hot, peas porridge cold, peas porridge in the pot nine days old.”

Sometimes they could obtain pork and would feel really special when that happened. When company came over, they would bring out some bacon and hang it to show it off. It was a sign of wealth and that a man “could really bring home the bacon.” They would cut off a little to share with guests and would all sit around and “chew the fat.”

Those with money had plates made of pewter. Food with a high acid content caused some of the lead to leach onto the food. This happened most often with tomatoes, so they stopped eating tomatoes… for 400 years.

Most people didn’t have pewter plates, but had trenchers – a piece of wood with the middle scooped out like a bowl. Trenchers were never washed and a lot of times worms got into the wood. After eating off wormy trenchers, they would get “trench mouth.”

Bread was divided according to status. Workers got the burnt bottom of the loaf, the family got the middle, and guests got the top, or the “upper crust”.

Lead cups were used to drink ale or whiskey. The combination would sometimes knock them out for a couple of days. Someone walking along the road would take them for dead and prepare them for burial. They were laid out on the kitchen table for a couple of days and the family would gather around and eat and drink and wait and see if they would wake up. Hence the custom of holding a “wake”.

England is old and small, and they started running out of places to bury people. So, they would dig up coffins and would take their bones to a house and reuse the grave. In reopening these coffins, one out of 25 coffins were found to have scratch marks on the inside and they realized they had been burying people alive. So they thought they would tie a string on their wrist and lead it through the coffin and up through the ground and tie it to a bell. Someone would have to sit out in the graveyard all night to listen for the bell. Hence on the “graveyard shift” they would know that someone was “saved by the bell” or he was a “dead ringer”.

So many offices have Dilbert posters or cartoons posted that we have to have some of his wit and wisdom here. If you want to enjoy more cartoons, you can visit Dilbert.Com for even more fun and laughter. Thank you, Scott Adams!

In accordance with company policy, we are pleased to inform you that you received merchandise with the same high quality standards afforded all our customers, and we feel you are extremely chicken-shit for returning this stuff, particularly since we did not authorize the return.

You know damned well we have a comprehensive and equitable Returned Goods Policy, and you will pay hell receiving credit unless this policy is strictly adhered to. We ship whatever the hell comes off the production line, and whether it meets specifications or not is beside the point. We are reasonably confident our packaging contains the proper materials a good share of the time, which is exactly what you ordered. By God, no one is perfect.

I’d like to see your production area sometime. I’ll bet you have a shit-pot full of problems too. Incidentally, you have really pissed off our Scheduling and Production people with your arbitrary statements regarding late delivery. After all, your last order was only three months overdue, which is a helluva lot better than most of our customers get. What the hell do you expect?

On future orders, we suggest you favor us with a higher dollar volume, and we will bust our asses. With this type of volume, we can guarantee a maximum late order condition of two months…how’s that for a thirty day improvement?

As a valued customer, it is certainly your privilege to request we check future orders more closely for requested shipping dates, but your prickish attitude will, we are confident, result in our shipping so damned late that you will be in such a bind that you will gladly accept any old shit we want to get rid of.

By the way, don’t give us any crap about order cancellations;
We’re already in production. We could, however, see our way clear to stop production if you will pay 90% cancellation charges, along with a 25% restocking fee. Otherwise, tough shit.

In summary, you work with us, and we will work with you. BUT!! Don’t pull that irate customer shit on us, we’ve been down that path before.

P.S. You screwed up again when you insisted our part doesn’t resemble your specification drawings. BULLSHIT!! Your drawing isn’t even close to our part. We know there was a 1-1/2″ difference between the part and the drawing, which we consider minor and totally insignificant. Why don’t you get on your Engineer’s ass for a change?

After a 2 year study, the National Science Foundation has determined the following results on Corporate America’s recreational activities.

CONCLUSION:
That the higher you are in the corporate structure, the smaller your balls become.